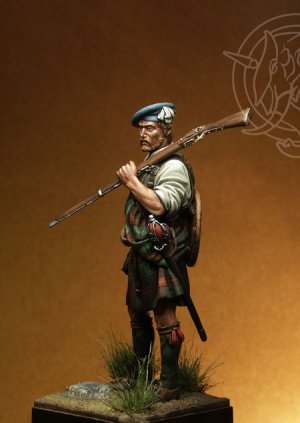 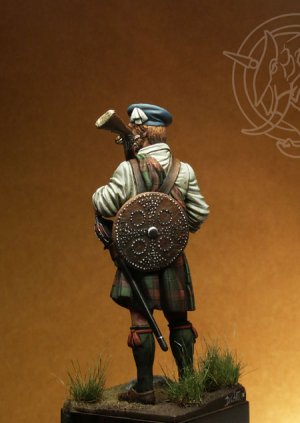 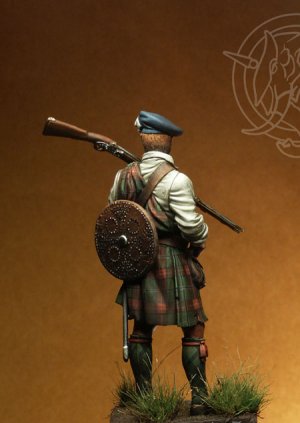 The Jacobite - 1746 The landing of Prince Charles Edward Stuart at Arisaig on 25th July 1745 saw the beginning of the â€śforty-fiveâ€ť rising, which sought to put James VIII Stuart on the throne of England. Prince Charles began his campaign with a 1,200-strong army. On 21st September the Scots defeated the English troops at Prestonpans following a five-minute charge that killed 500 men and took about 1,000 prisoners. Their march then pushed south until just a few kilometres from London. As the English had reorganised their troops, the Scots were in danger of being surrounded and decided to turn back towards Scotland. On 17th January1746 the Scots defeated the English at Falkirk, in torrential rain that made it difficult to use muskets. The Highlanders, on foot, charged the enemy cavalry which fled the field. The English infantry was also forced to retreat, leaving some of their cannons behind, 350 dead or wounded and 300 prisoners. At this point the command of the English army passed into the hands of the Duke of Cumberland (George IIâ€™s son) who reorganised the troops and, on 16th April 1746, using powerful artillery, won the last battle against the Scots, thus putting an end to all hopes of Stuart restoration to the throne of England. From the initial number of 1,200 men, the Jacobite army increased to a maximum strength of 8,000 under the orders of their leaders. Hundreds of men belonging to the Cameron, Macpherson, Stewart of Appin, Keppoch, Glengarry, Atholl, MacDonald and Gordon clans joined the rebel forces, along with many others, while the Campbell, Grant, Munro and Sutherland clans sided with the Hanoverians or remained neutral. The lack of specialisation and training was evident, and discipline, unlike that in the English army, was not imposed by the whip, and was not strict. Menâ€™s loyalty depended on their leaders. Only a few men deserted during the invasion of England, but during the campaign in Scotland the number increased, and those caught deserting were not shot but forced to fight again. The Jacobites had a variety of weapons: sword and shield, dagger (dirk), pistols and muskets of French and Spanish origin, but firearms and ammunition were scarse, so much so that the men who crossed the English border had only 12 shots and were recommended not to waste them. The Highlanders clothing was civilianâ€“a beret, shirt, jacket and the traditional tartan plaid. Apart from the white bow of the Stuarts and the shirt in white or raw wool, all the rest can be painted almost as the artist pleases. Belt, sporran, shoes, shoulder belt, sword and dagger sheaths and shield are in naturalâ€“coloured leather, metal buckles are often silver, as is the sword hilt and the studs on the shield. Knee-high socks can be in one colour only, check or tartan. For the painting of the tartan it is advisable to consult a book on the subject as the patterns are intricate. The pattern should be kept simple as the tartans depicted are all post XVIII century, and the Black Watch tartan and others derived from it are to be avoided as they were government and regimental tartans.