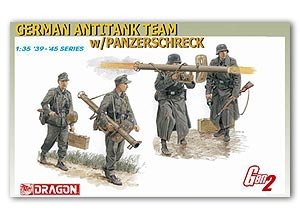 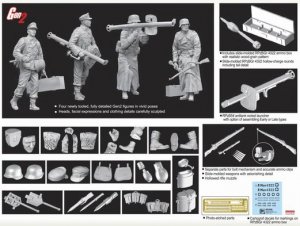 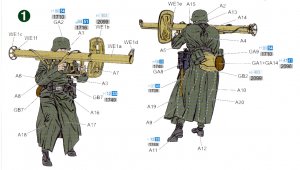 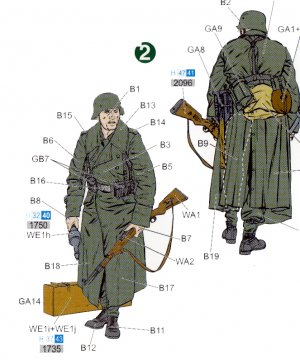 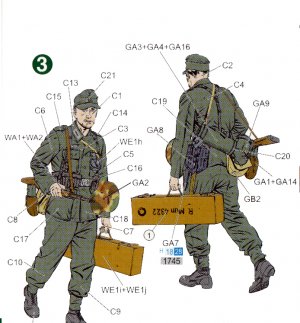 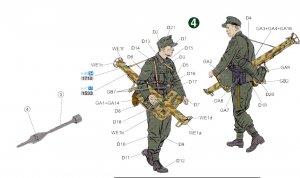 German Anti Tank Team with Panzershcreck As the Soviet T-34 tank rumbled along the snow-coated street, its steel track treads crumbled the rubble into powder. Lurking in the shadows, a figure raised his weapon and took careful aim at the monstrous steel hulk bearing down on him. Suddenly he fired, the Ofenrohr (“Stove Pipe”) emitting a large cloud of smoke. A rocket streaked towards the tank and penetrated its sloped armor, the vehicle clanking to a stop as flames and smoke erupted from its interior. The German tank hunter team quickly scuttled away to find a new position. This type of scene was repeated over and over as German defenses were inundated by Soviet and Allied tanks in the latter part of WWII. With a dire shortage of tanks and tank destroyers, one smaller but still effective German weapon was the Panzerschreck (“tank terror”) or Raketenpanzerbu"chse (“rocket tank rifle”, or RPzB). This antitank rocket launcher of 88mm caliber, from which the American bazooka was copied, was employed by infantry. Dragon’s newest figure set offers two Panzerschreck teams, one wearing winter uniforms and the other attired in summer uniforms. Their versatility allows them to be used for either Eastern or Western Front dioramas. As a Gen2 set, the figures are crisply detailed and have anatomically vivid poses. Likewise, their associated gear is sharply molded. Their RPzB 54 weapons with characteristic blast shields are amazingly detailed, the most accurate yet thanks to their Gen2 status. These teams are ready to terrorize some enemy tanks, and simply await a modeler’s touch to bring them to life!