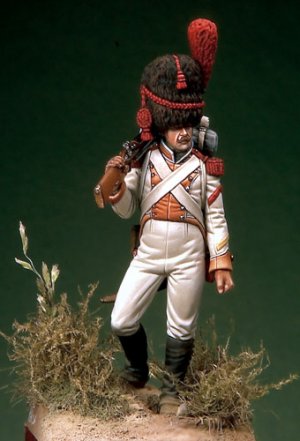 Grenadier of Line Infantry - Reign of Naples (1815-20) The reign of Gioacchino Murat (1808-1815), saw the introduction of beautiful French styled uniforms. The new uniforms had significant variations of both the Parisian style of clothing as well as the homogenous Imperial style (during the reign of Napoleon). After 1812, the cut of the uniform appeared shorter, the colour of the jabot more distinctive whilst the large and abundant fur caps were typically Neapolitan styles. The Neapolitan involvement in the Grand Army of 1812 was high, for example, the 5th Regiment of the line of Real Calabria, the 6th Real Napoli and the 7th Real Africano were all involved directly in the Russian Campaign. These three Regiments reunited in Danzing between September and October whilst the bulk of the Army with King Gioacchino had only reached the Russian border. Following the disaster in Russia and the retreat of the Grand Army, several members of the various Neapolitan Regiments were chosen to defend Danzing. These soldiers were reunited into one Elite Regiment under the command of Colonel MacDonald. This Elite Regiment, united with the Gerard Division, coped brilliantly as a rear guard from Elbing to Posen and eventually to the River Elbe. They also fought on the 2nd May 1813 at the Battle of Lutzen.