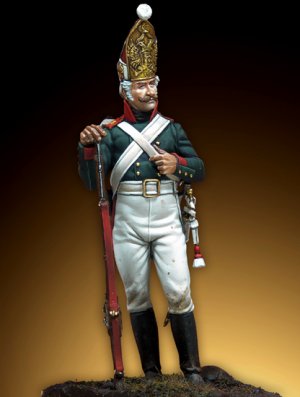 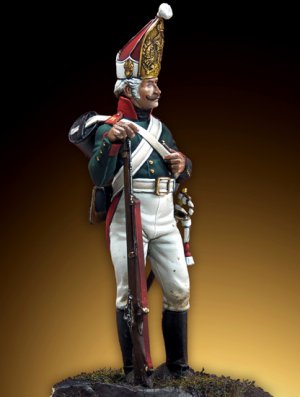 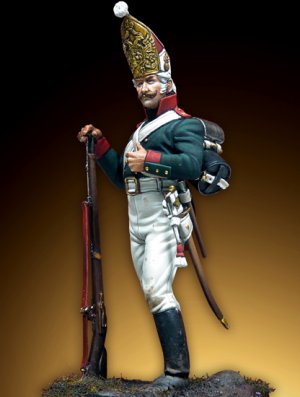 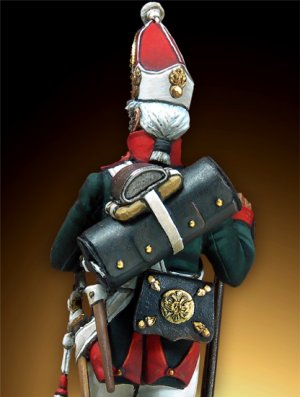 Russia 1805 - Grenadier of Pavlowski Regiment - Line Infantry Pavlowski Regiment was formed by the Emperor Paul I on 1796, recruiting soldiers taken from the old regiment Moscowski Grenadiers. Incorporated in the Line infantry, tooks part actively in the campaigns against France, especially on 1807 (Eylau, Lindenau, Heilsberg and Friedland), where the colonel commandant Mazowski was killed. The regiment showed an unique tradition, the lasting use of the mitre, the particular old style headgear. On February 1805 the mitre was abolished for all regiments, but Pavlowski was authorized to keep it. After Friedland, the tzar Alexander 1st, in honour of the glorious actions during the battle, decided that the mitre was worn even if damaged by rifle shots. During the Russian campaign of 1812, the regiment Pavlowski was incorporated in the first Division of Grenadiers, 3rd Corp commanded by the general Touthckov, first Army. The grenadier company of the 2nd battalion, together with some companies of other regiments, formed an autonome grenadiers battalion. The regiment took part to Borodino battle, on the road for Smolensk, engaging furious combats against Poniatowski troops, when the colonel commandant Richter was blessed. Effectives of the regiment participated also at the battles of Krasnoje, Kliastis, Polotsk and Berezine. Owing to the courage showed, the regiment was admitted on April 1813 in the Young Guard, as Leib-Grenaderski regiment, fighting in the Saxony campaign at Lutzen, Bautzen, Dresde, Kulm e Leipzig. At least, the regiment had the honour to enter into Paris, after a combat at Pré St.Germain, in the suburbs of French capital.