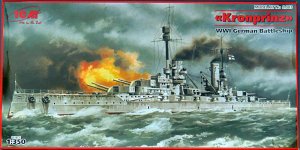 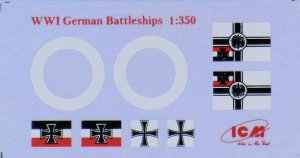 Kronprinz, WWI German Battleship SMS Kronprinz is a German battleship König class and style dreadnought that participated in the Kaiserliche Marine in several naval battles during the First World War. In tribute to the thirtieth anniversary of the arrival of William II to the throne, he was named SMS Kronprinz Wilhelm ("Crown Prince William," in honor of Prince William of Prussia). The ship was built by the Germania arsenal of Kiel and launched February 21, 1914. Her tonnage is 25 800t and is armed with ten 30.5 cm caliber guns with five double turrets. The Crown Prince was commissioned in the third squadron of Hochseeflotte and takes part in several actions during the First World War, the terrible battle of Jutland on 31 May and 1 June 1916, where he is fourth in line combat. This is the only vessel of its class that has not been damaged during the battle, and in the fighting in October 1917, off the islands of the Baltic Sea. He then fights with her sister ship, the SMS König hit the Russian armored cruiser, the Bayan, the battle Muhu Strait, as part of Operation Albion on October 17, and forces the retired battleship Tsarevich . It is one of the ships interned at Scapa Flow, which scuttled in 1919. He sank 21 June 1919 to 13 Hours 15.

Qty.
Maquetas - Barcos - ICM
Volver al listado
www.ecomodelismo.com use your own and third-party cookies to have the best browsing experience. If you keep browsing we understand that you accept our cookie policy.  Ver