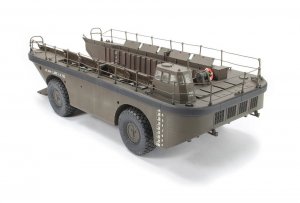 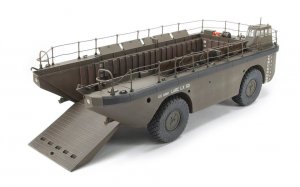 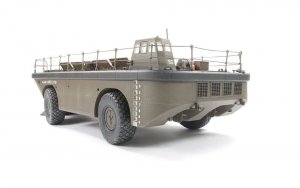 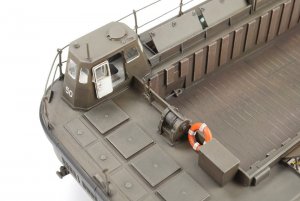 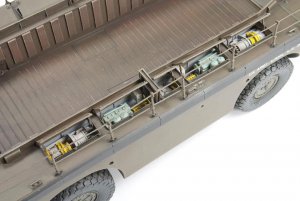 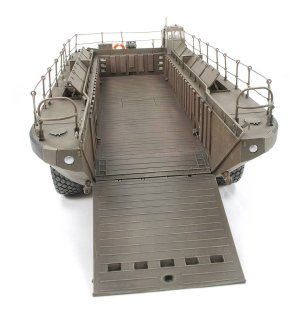 LARC-LX LARC-LX (Lighter, Amphibious Resupply, Cargo, 60 ton), or as it was originally designated BARC (Barge, Amphibious Resupply, Cargo) is a welded steel hulled amphibious cargo vehicle. It could carry up to 100 tons of cargo or 200 people, but a more typical load was 60 tons of cargo or 120 people. The vehicle was powered by four 265 hp (198 kW) GMC diesel engines positioned in the sides of the hull, each of which drove one wheel on land. Pairs of engines were coupled to drive each of the two 1.2 m (47 in) diameter propellers, which propelled the vehicle in the water. Its top speed was 20 mph (32 km/h) on land, or 7.5 mph (12.1 km/h) afloat. The operator occupied a small cab on the port side at the aft end of the vehicle. The LARC-LX was used to transport wheeled and tracked vehicles, including beach preparation equipment and general cargo, from ship-to-shore or to inland transfer points. It was also capable of transporting 40 ft (12 m) shipping containers, which could be landed from the LARC either by crane, straddle carriers, or rollers. It was the only amphibious vehicle in U.S. Army service capable of landing on a beach through surf. Typically, the LARC-LX was carried as deck cargo on a commercial vessel or heavy lift ship to be transported overseas. The first BARC had its maiden voyage in 1952 at Fort Lawton, Washington. The designation was changed from BARC to LARC in 1960. The LARCS first saw active service in 1967 when they were dispatched to Vietnam to support the 101st Airborne Division, and in 1968 the 1st Cavalry Division. The last amphibious company in the U.S. Army, the 309th Transportation (LARC LX) Company, 11th Transportation Battalion, was deactivated on 15 October 2001.

Qty.
Maquetas - AFV - Hobby Fan
Volver al listado
www.ecomodelismo.com use your own and third-party cookies to have the best browsing experience. If you keep browsing we understand that you accept our cookie policy.  Ver