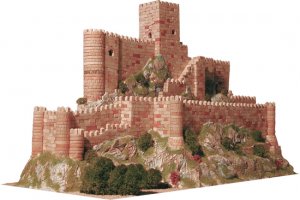 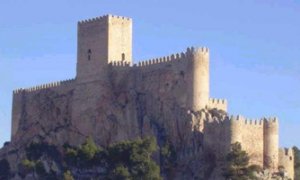 Almansa castle-Almansa - Spain - C. XIII Characteristics Scale: 1/350 Approx. Nº of pieces: 3.600 Difficulty degree: 7.5/10 Sizes (Mm.): 250 x 510 x 315 History This fortress is in the town of Almansa, in Albacete Province, Spain. Almansa Castle, the most representative in the region of Castilla la Mancha, is perched over the Cerro del Águila, a craggy hill that raises its spectacular silhouette over the Almansa plain creating a harmonious combination of the work of nature and the work of man. The origins of Almansa Castle date back to the Almohad period, whose characteristic form of construction, adobe walls, is today still evident on some of its walls. The castle passed through several hands until in the 15th century it was handed over to Juan Pacheco, who as the second Marquis of Villena undertook many of the reforms that have lasted until the present, among which feature the construction of the keep, the entrance barbicans and the embrasures for firearms. From the 16th century onwards, Almansa Castle, like many other Spanish castles, went into a long process of abandonment and deterioration until in 1952 it experienced a profound restoration on its periphery. The eastern sector of Cerro del Águila is of very steep gradients and difficult to cross. The other side has gentler slopes. The castle is made up of two echeloned areas, both shaped by semicircular towers and crenelated walls. The lower area has two entrance doors, one on each side of the bailey. From the bailey, climbing a steep stairway, the second area is reached, in the centre of which is erected the majestic keep. This tower has a square ground plan, with masonry and ashlars works; the interior vaulting has Gothic cross vaulting with stone ribs. On the upper part of the tower is a crenelated terrace, which is reached by a spiral staircase carved in rock in a Gothic style.