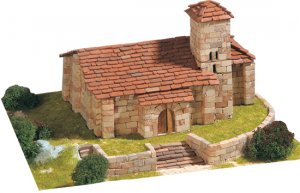 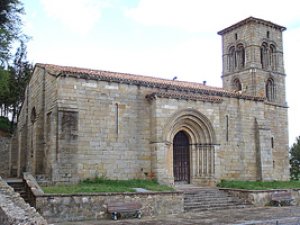 Santa Cecilia church-Aguilar de Campoo, Spain - C. XII Characteristics Scale: 1/150 Approx. Nº of pieces: 1.400 Difficulty degree: 3.5/10 Sizes (Mm.): 250 x 285 x 150 History The church of Santa Cecilia is situated in a dominant position overlooking the old quarter, on the side of the hill where the ruins of the castle complex of Aguilar del Campoo are to be found, in the Palencia province in Spain. It was declared a Historical-Artistic Monument in 1963. The date of its construction, 1041, appeared on a now-disappeared tombstone. Until the mid-13th century it was the main church of the early town of Aguilar. The current building can be dated in the closing years of the 12th century and early 13th century and its construction seems to have been promoted by the Lara family. It has a solid exterior volume, lightened by a beautiful tower raised in the position of one of the side apses; its interior, which has a ground plan of three naves and double head with wooden roof, houses some interesting historiated capitals. The current church is the result of several building campaigns developed throughout the medieval and Baroque periods.