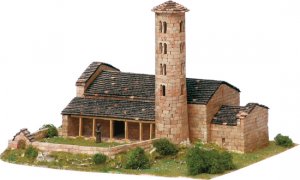 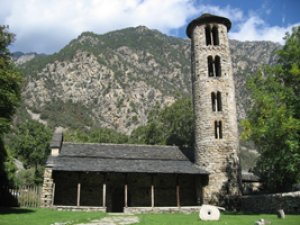 Santa Coloma church-Andorra la Vella, Andorra - C. X - XI Characteristics Scale: 1/150 Approx. Nº of pieces: 3.400 Difficulty degree: 6.5/10 Sizes (Mm.): 350 x 280 x 240 History In Andorra la Vella, on the right bank of the River Valira and at 970 metres altitude, is the pre-Romanesque church of Santa Coloma. It is one of the oldest and most beautiful and interesting examples of Romanesque architecture in the country. It is mentioned in the deed of consecration of the Cathedral of La Seu d'Urgell in 1040. The structure of the church is of a single nave and rectangular ground plan, a square apse facing east, A doorway and simple porch on the south wall of the nave, and a four-storey bell tower of a circular ground plan, the construction of which can be dated in the 12th century, following 11th-century models. In the interior, the triumphal arch is an extremely antiquated semicircular one, much smaller than the wall in which in which it is set. It possesses an important series of Romanesque mural paintings of which the only one surviving en situ is that of the Agnus Dei, over the triumphal arch. Also of note is the polychrome wooden carving of the Virgin of the Remedios.