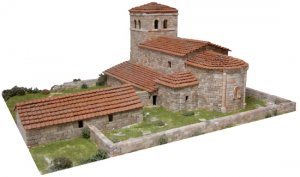 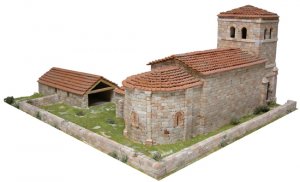 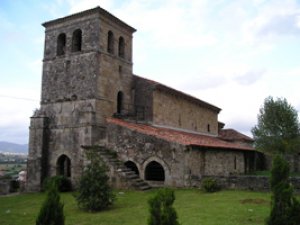 San Andres church-Argomilla, Spain - C. XII Characteristics Scale: 1/65 Approx. Nº of pieces: 5.400 Difficulty degree: 5.5/10 Sizes (Mm.): 490 x 580 x 225 History Situated on a small hill, opposite the splendid Ceballos Palace, with which it forms a beautiful collection of buildings, the Romanesque church of San Andrés is one of the most outstanding monuments in the Pisueña Valley, related in style to the nearby Collegiate of Santa Cruz in Castañeda. Probably built in the first half of the 12th century, it was an abbey which in time came to depend on the Ceballos family. This family had a closed estate in which there were, apart from the church, five houses and a mill. The residents were free men and were exempt of taxes. The church we see today is of a single nave and one semicircular apse, with diverse additions such as the tower, the sacristy and a gallery in the south. The front door opens to the west and to enter the church you cross a porch, over which is built the tower. The capitals decorating the door portray animal -lions, harpies, birds- and human subject matter in their imagery. The large apse is divided into three vertical sections separated by columns that are crowned with decorated capitals. It preserves a fine series of small corbels with a variety of motifs that continue along the presbytery and the north and south walls. Over them rests a beautiful cornice of chequered squares. There are two apse windows that can be seen from the outside: one, situated on the south, was covered by the construction of the sacristy in the 17th century, on the wall of which the Ceballos family placed their coat of arms, as well as those of Santandrés, Escobedo and Velasco. The inside features a very low semicircular triumphal arch, which is supported over well-historiated capitals. Worth mentioning for its originality is the upper impost of the apse, supported on small interior corbels. The southern added section preserves sepulchres from the church necropolis, with dates that go from the early 11th century through to the 13th century.