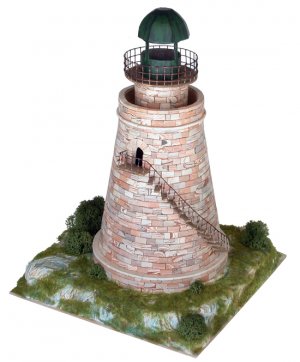 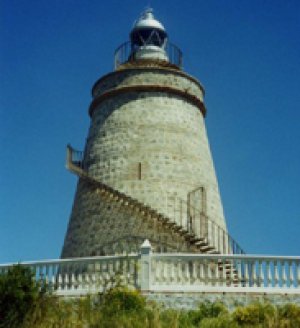 La Herradura lighthouse-Almuñecar, Spain - C. XVI Characteristics Almuñecar, Spain - C. XVI Scale: 1/75 Approx. Nº of pieces: 1.500 Difficulty degree: 4/10 Sizes (Mm.): 200 x 200 x 265 Historic Its name corresponds to the same name of the cove, harbour and country house that are in its environs. It is situated over an old watchtower, known as Punta de la Mona, within the district of Almuñécar, in Granada, Spain. This tower was built during the reign of Felipe II, like the majority of those marking out the area, and which formed a complex surveillance network of towers that communicated with each other through fire and smoke signals, to warn of the incursion of possible enemies and to provide navigation aid at night. According to chronicles of the time the link was so perfect that any Berber attempt at invasion was immediately transmitted to the cities, giving them time to prepare troops. This system formed a rudimentary telegraph, the effectiveness of which was clearly demonstrated over many years of uninterrupted use. Those in charge were military keepers, predecessors of the lighthouse keepers. The construction of the tower is of a truncated cone shape, of limestone masonry and lime mortar with tiled ceramic layers of brickwork. Its main measurements are 11.20 metres high, 8.80 m diameter at the bottom and 5.75 m diameter at the crowning. The recovery project of the tower for its use as a lighthouse again was passed in 1989. The main characteristics of the La Herradura Lighthouse are: nominal reach 15 miles. Height of focal plane over sea level 141 m, over land 14 m, luminous intensity of 20,000 candle power and night appearance of white signal lights repeated every 5 seconds.