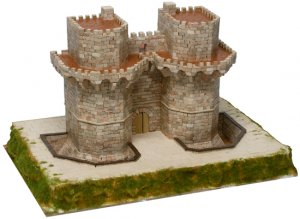 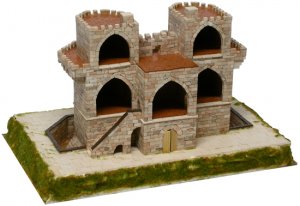 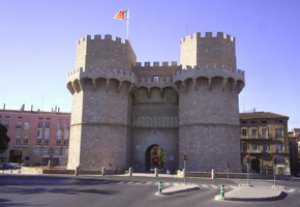 Serranos's towers-Valencia, Spain - C. XIV Characteristics Scale: 1/180 Approx. Nº of pieces: 4.600 Difficulty degree: 6/10 Sizes (Mm.): 245 x 380 x 220 History The Serrano Towers formed part of the ambitious walled precinct that Pedro III the Ceremonious ordered to have built in 1356. Pere Balaguer was the master builder who directed the construction. Given its defensive nature, it is made of solid masonry reinforced with ashlar facing, in limestone from the quarries of Almaguer, Bellaguarda and Rocafort. It brings together all the elements of military engineering of the time, though its defensive nature is not present on the side that faces the inside of the city, the vaulted sections not having any protective covering. This unique aspect was completely in line with the wishes of the Authorities, thus preventing the possibility of garrison troops or invaders using the towers against the city itself. Currently surviving in the city are the Quart Towers, flanked by two towers of considerable height and of a similar defensive nature. The central wall section over the semicircular arch of the door is decorated with a fine tracery of florid Gothic style on which the coats of arms of the city and the kingdom stand out. The chambers of the lower floors are covered by Gothic groin vault and the upper chambers by sections of pointed barrel vault strengthened by ribs. A barbican or battlemented walkway links up the main body with both towers at the third floor level. There is no doubt that it currently constitutes one of the most representative monuments of Valencia, Spain