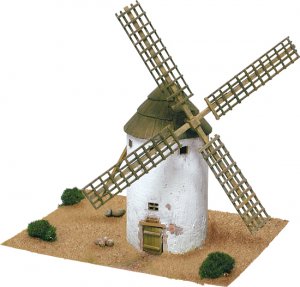 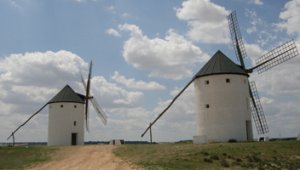 La Mancha windmill-Castilla La Mancha - Spain - C. XVI Characteristics Scale: 1/125 Approx. Nº of pieces: 1.250 Difficulty degree: 5/10 Sizes (Mm.): 300 x 230 x 340 History For time immemorial mankind has used wind to obtain energy. All the information we have about windmills points to the fact that the first constructions of this type in Europe were in the 10-11th centuries. The best examples of Spanish windmills, though restored, are in Campo de Criptana, to the northeast of Ciudad Real and in the Toledo region town of Consuegra; all of them within the Castilla la Mancha community, known popularly for the Don Quixote routed, the character from Spanish literature intimately linked to the region and its windmills. The type of windmill in Campo de Criptana is known as the "tower" windmill. Typical of this kind of windmill is the construction method, based on stone and whitewash, with a roof in a conical form and wooden frame. The ground plan is circular, with a thick wall that supports a rotating cap for facing the wind. The movement of the rotating cap is made directly over circularly fitted iron rings. The typical Manchego windmill has four sails with a central windshaft and fifteen or more sailbars. This kind of pole gives it a solidity that enables it to have long and narrow sails.