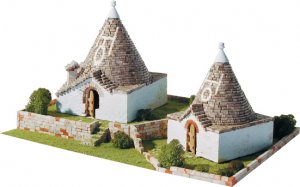 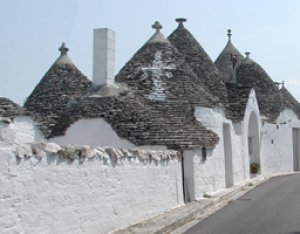 Trulli of Alberobello-Alberobello, Italia Characteristics Scale: 1/80 Approx. Nº of pieces: 2.800 Difficulty degree: 7/10 Sizes (Mm.): 410 x 290 x 200 history A trullo is a small, old stone building, made up of a square or circular base that supports a cupola in the form of a cone which at the same time acts as the base for the pinnacle. The pinnacles give a special elegance to the conical structure, which are normally white and made from hand-carved stone: they are used to adorn the trullo and represent the signature of the constructor. Some people say that the meaning of the pinnacles is symbolic, in the same way as the illustrations on cupolas. The most diverse examples of trulli and pinnacles are in Alberobello (southern Italy), declared a World Heritage Site. The trullo is a small building, with little light and very few windows and doors. Each trullo is built by hand and the blocks of stone on their walls were placed without any type of mortar. The particular symbol of each trullo is always placed over the cupola. The origins of the symbols are not known exactly but were painted only on private homes as a symbol of a good omen.