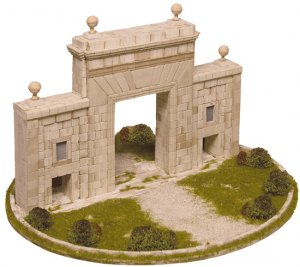 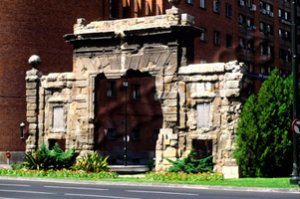 Carmen's gate-Zaragoza, Spain - C. XVIII Characteristics Scale: 1/55 Approx. Nº of pieces: 1.000 Difficulty degree: 6/10 Sizes (Mm.): 330 x 330 x 170 History The Puerta del Carmen (Carmen gateway) is situated on the Paseo María Agustín (where it meets Avenida César Augusto and Calle Hernán Cortes) in Zaragoza, Spain. It was built in neo-classical styles by the architect Agustín Sanz in 1789 and opened in 1792. It is one of the gateways that the city possessed in the 18th century and which suffered the damaging effects of the sieges by Napoleonic troops during the War of Independence (1808-1809), known popularly as the Sieges of Zaragoza. This, however, was not the only notable event in its history, since it was through this gateway that the army entered in 1838 during the First Carlist War. The Puerta del Carmen gives an idea of the size of Zaragoza in the late-18th century, since it is one of the entrance gateways that the city had in its second walled section; today it stands alone. The value of the Puerta del Carmen is more historic than artistic since the gateway has been a witness to significant events in the city's history. Architecturally it is a simple stone gateway, with a Roman triumphal arch structure, responding to the Madrid-style neo-classical models. It is made up of a higher central arch and two lateral arches.