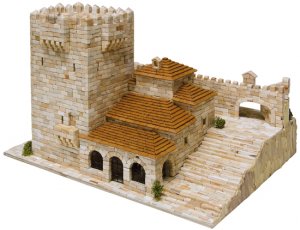 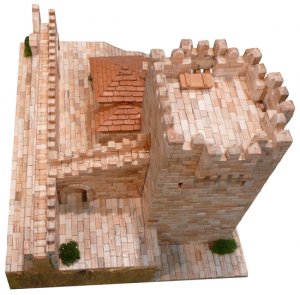 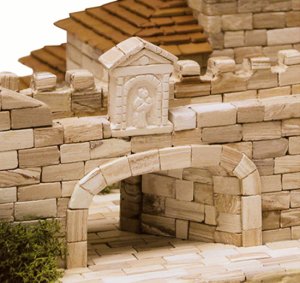 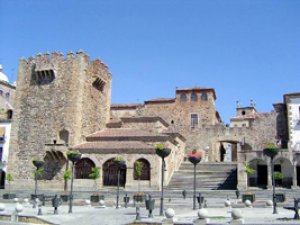 Bujaco tower-Caceres - Spain - C. XV - XVIII Characteristics Scale: 1/125 Approx. Nº of pieces: 4.300 Difficulty degree: 7/10 Sizes (Mm.): 300 x 240 x 200 History Bujaco Tower It belongs to the walled Almohad enclosure of the city, it is her most important tower and it gives the sensation of power and strength. According to the tradition, in this tower, the last Christian defenders of the city (year 1173) took refuge. They were the "Fratres de la espada", order of horsemen whom later origin the Santiago order. Apparently, it was constructed towards century XV with her merlons and machicolations similar to which today it has, already recovered. Towards year 1820, it was placed at the top of the tower, in the main facade, a statue of the Genius of the Norba Colony in his interior; in 1962, the patronage of the Monumental City, made clear this statue recovering the original merlons. Peace Hermitage The Hermitage was built during 18th century and is back-to-back to the Tower of Bujaco. It's preceded of a gallery with columns and arcs throughout the facade. Inside the Hermitage there are hemispherical cupolas supported in four pillars that divide the plant in three sections. The image of Our Mrs. of La Paz that is in the greater altarpiece was carved in 1736 by Pedro Correa, a sculptor from Valladolid. The iron doors of the frontal arcs were work of Juan de Acedo in 1756. Star Arch It was also built during the 18th century to substitute the old Puerta Nueva. The skew arch was designed to make easier the passage of vehicles. In the inner part of the enclosure and trim to the door, it appears a pavilion with an image of the Virgin; this image is illuminated by a light in the form of star that gives name to the Arch. The Arch was designed by the architect gift Manuel de Larra Churiguera and ordered by the count of the "Quinta de la Enjarada".