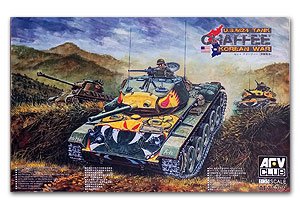 US M42 Chaffee Korea War The Light Tank M24 was an American light tank used during the later part of World War II and in postwar conflicts including the Korean War and, with the French, in the War in Algeria and the First Indochina War. In British service it was given the service name Chaffee, after the United States Army General Adna R. Chaffee, Jr., who helped develop the use of tanks in the United States armed forces. Combat experience indicated several shortcomings of the Light Tank M3/M5, the most important of them being weak armament. The T7 design, which was initially seen as a replacement, evolved into a mediocre Medium Tank M7 and was eventually rejected in March 1943, which prompted the Ordnance Committee to issue a specification for a new light tank, with the same powertrain as the M5A1 but armed with a 75 mm gun. On October 15, 1943 the first pilot vehicle was delivered and production began in 1944 under the designation Light Tank M24. It was produced at two sites; from April at Cadillac and from July at Massey-Harris. By the time production was stopped in August 1945, 4,731 M24s had left the assembly lines. Some of them were supplied to the British forces. The M24 Chaffee was intended to replace the aging and obsolete Light Tank M5 (Stuart), which was used in supplementary roles. The first thirty-four M24s reached Europe in November 1944 and were issued to the U.S. 2nd Cavalry Group (Mechanized) in France. These were then issued to Troop F, 2nd Cavalry Reconnaissance Squadron and Troop F, 42nd Cavalry Reconnaissance Squadron, which each received seventeen M24s. During the Battle of the Bulge in December 1944, these units and their new tanks were rushed to the southern sector; two of the M24s were detached to serve with the 740th Tank Battalion of the U.S. First Army. In the Korean War, M24s were the initial U.S. tanks directed to combat the North Korean T-34-85s. The occupation troops in Japan from which the tanks were drawn were inexperienced and under-equipped due to rapid demobilization after World War II. The M24 fared poorly against these better armed, better armored, and better crewed medium tanks. Managing a fighting withdrawal, they ended up as artillery in the Pusan Perimeter; in August reinforcements from the US and the Commonwealth brought heavier tanks. M24s were more successful later in the war in their reconnaissance role, supported by heavier tanks such as the M4 Sherman, M26 Pershing, and M46 Patton. 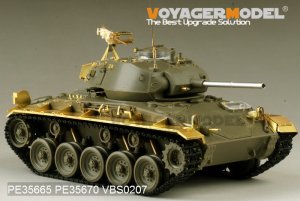