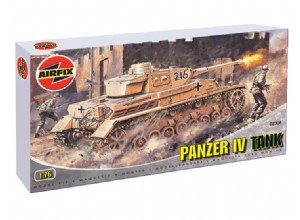 Panzer IV Tank The most widely manufactured and deployed German tank of WWII, the Panzer IV. Robust and reliable, it saw service in all combat theatres involving Germany, and has the distinction of being the only German tank to remain in continuous production throughout the war, with over 8,800 produced between 1936 and 1945. The losses it felt however on the Eastern front were enormous – throughout 1943, the German army lost 2,352, and in 1943 a further 2,643.

Qty.
Maquetas - AFV - Airfix
Volver al listado
www.ecomodelismo.com use your own and third-party cookies to have the best browsing experience. If you keep browsing we understand that you accept our cookie policy.  Ver