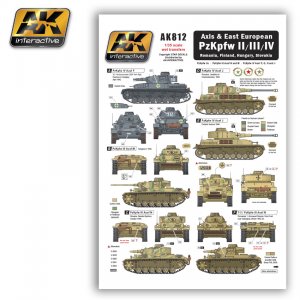 Axis & East European PzKpfw II/III/IV With this decal set, you can depict the most popular German WWII armor, carrying some of the least commonly-seen markings, and thus create models that are both unusual and spectacular. Most of the vehicles depicted in this set, were used alongside German troops, but you also have the possibility of building Panzers that were used against their former allies, such as the Romanian Panzer IVs.

Qty.
Maquetas - Calcas - AK Interactive
Volver al listado
www.ecomodelismo.com use your own and third-party cookies to have the best browsing experience. If you keep browsing we understand that you accept our cookie policy.  Ver