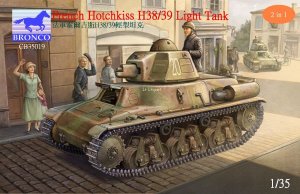 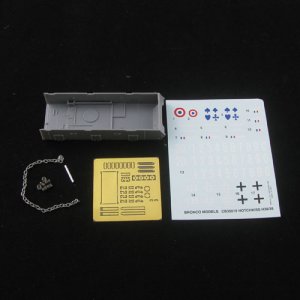 French Hotchkiss H38/39 Light Tank Hotchkiss began the production of Light Tanks in 1935, when the H-35 was built to the same specification as the Renault R-35. The H-35 was faster than its rival and was considered all-around a better tank. In 1938 the design was improved by thicker armour and a more powerful 120hp engine, which necessitated changes to the rear hull and engine compartment. This model being designated the H-38 by Hotchkiss, but was often known in service as the H-39. Armour on the H-38/39 was up to 40mm thick and the tank was initially armed with a 37mm short barrel gun. A longer barreled SA38 gun was mounted to later production tanks. Like all French tanks of the period, the H-39 was hampered by a lack of communications, and also by having only a 2-man crew. The German Army salvaged 821 Hotchkiss tanks in 1940 after France capitulated. Some tanks were sent out to Russia in 1941, but the majority were modified into gun tractors, ammunition or weapons carriers.