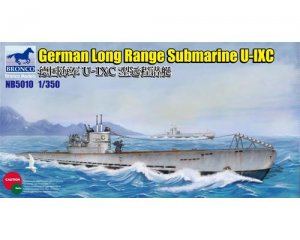 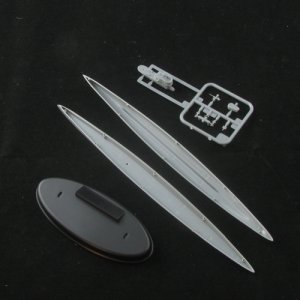 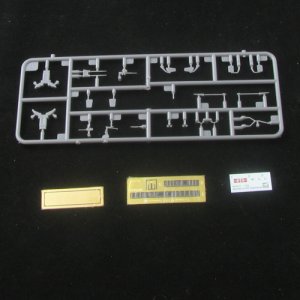 German Long Range Submarine Type U-IXC The Type IX U-Boat was designed in Germany from 1935 as a large ocean-going submarine for long range combat patrols. The large size necessary for long range opperations meant that the Type IX was inferior to the Type VII in most other respects, and so was built in smaller numbers. The MkIX was built in several variants, each with small improvments in range. The Type IXC had larger fuel storage, for an extra 43 tonnes of fuel, but had one of the periscopes omitted. The MkIXC was built as a patrol submarine (35) and as a mine layer (19), making a total of 54 boats built by AG Wesser and Seebeckwerft of Bremen and Deutche Werft of Hamburg. The submarine had a displacement (submerged) of 1,232 tonnes and a length of 76.8 meters. The MkIXC could cruise 46,000 Km at a surface speed of 10 knots, maximum speed was 18 knots surface or 7.5 knots submerged. Six torpedo tubes were mounted, 4 Bow and 2 Stern, with 22 torpedos, and the minelayers could carry up to 44 mines. Secondary armament was a 105mm deck gun and several machine guns which could be mounted on the coning tower. One Type IXC was supplied to Japan, U-511, it was sold in September 1943 and numbered RO 500. It was surrendered to the Americans in 1945 and scuttled some months later.

Qty.
Maquetas - Submarinos - Bronco Models
Volver al listado
www.ecomodelismo.com use your own and third-party cookies to have the best browsing experience. If you keep browsing we understand that you accept our cookie policy.  Ver