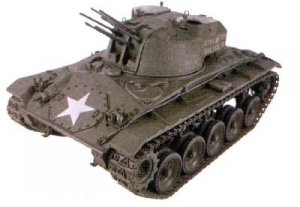 US T-77 Multiple Gun Motor Carriage The T77 Multiple Gun Motor Carriage was an anti-aircraft weapon that carried a quad .50in machine gun mounting on the back of a modified M24 Chaffee light tank. The T77 was designed in an attempt to replace the M16 Multiple Gun Motor Carriage, based on a M3 half-track. Most of the early work went into the T89 quad mount for the .50in guns, which used similar technology to the remote controlled turrets of the B-29 Superfortress. This was a rather unusual looking gun turret with sloped sides and two open crew positions at the back-left and back-right of the turret. Each of these positions had a full set of firing controls and gun sights. This turret replaced the normal gun turret on a fairly standard M24. The pilot underwent trials at the Aberdeen Proving Ground from July 1945. A number of changes were introduced on the second pilot, including a computing gun sight and plexiglass covers for the open crew positions. This second pilot was given the designation T77E1. The second pilot was ready for tests by the autumn of 1945, but the project was cancelled after the end of the Second World War, partly because it was clear that the T77 wouldn’t be able to cope with fast attack jets.

Qty.
Maquetas - AFV - Ding-Hao Hobby
Volver al listado
www.ecomodelismo.com use your own and third-party cookies to have the best browsing experience. If you keep browsing we understand that you accept our cookie policy.  Ver