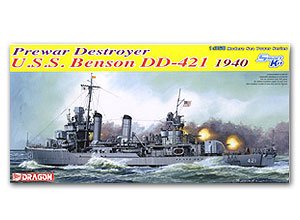 USS Benson class Destroyer Benson DD-421 1940 In its Modern Sea Power series, Dragon previously released a 1/350 scale plastic kit of USS Benson (DD-421). Commissioned on 25 July 1940, this US Navy destroyer was the lead ship of a class widely used in WWII. The name of the destroyer stems from that of Admiral William S. Benson (1855-1932). Dragon’s earlier kit (Item No.1032) showed the destroyer as it was configured in 1945. At this time USS Benson had completed naval operations in the Mediterranean Sea, and in May of that year the destroyer had then been transferred to the Pacific Ocean theater until the end of WWII. This latest 1/350 scale kit from Dragon shows the same destroyer, but this time in its original configuration shortly after its commissioning in 1940 at the Boston Navy Yard. Its shakedown period was in the Caribbean. Remembering that the USA was not yet at war in 1940, USS Benson commenced neutrality patrols in the Atlantic in November of that year. Such was the popularity of the original kit of this destroyer, that Dragon has launched this additional kit of the destroyer in its early life. It may be the same ship, but the kit has quite a different setup. An abundant assortment of brand new parts includes a replacement hull made by slide molds. A completely new hull was called for due to important differences from that of Item No.1032. The aft superstructure and deck are also new, as is the main mast with its crow’s nest. Other differences between the two kits are the rangefinder, .50-cal AA guns, and the blast shield for the aft torpedo launcher. A generous selection of photo-etched parts is available for items such as the sky-lookout shield and various ladders. This is yet another fine kit in Dragon’s ship range, and as a Smart Kit, it offers a pleasurable built to modelers of all skill levels.