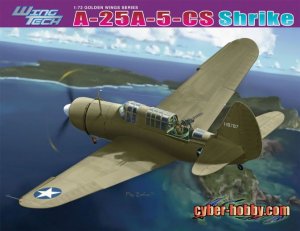 A-25A-5-CS Shrike It's the A-25A Shrike, an aircraft ordered by the US Army Air Force (USAAF), in contrast to the Helldiver that was used by the US Navy (USN) during WWII. Curtiss built 900 Shrikes at its St. Louis plant, with the first flying in September 1942. While the first ten had folding wings, this feature was soon abandoned as being unnecessary, and production of the A-25A ceased in late 1943. Other differences compared to the Helldiver were the absence of a tail hook, larger wheels, a pneumatic tail wheel and etc.

Qty.
Maquetas - Avion - Dragon
Volver al listado
www.ecomodelismo.com use your own and third-party cookies to have the best browsing experience. If you keep browsing we understand that you accept our cookie policy.  Ver