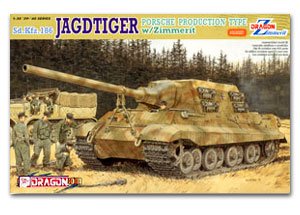 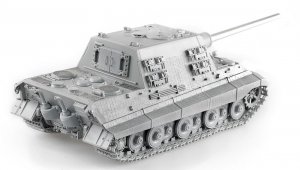 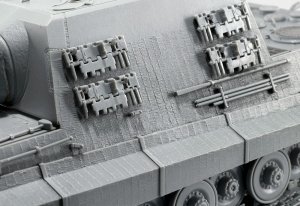 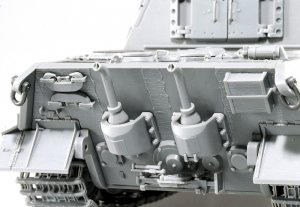 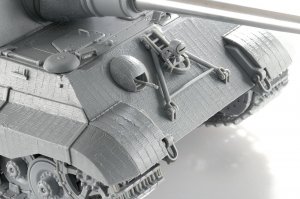 Jagdtiger Porsche Type w/Zimmerit Coating Weighing in at 71.7 tonnes, the German Jagdtiger tank destroyer was definitely the super heavyweight of WWII armored vehicles. It was 10.65m long from the tip of its gun muzzle to the outlets of the rear exhausts, and it was a massive 3.6m wide. Although it was armed with a lethal 12.8cm PaK 44 L/55 gun, the Jagdtiger’s enormous bulk impacted severely on its mobility, meaning it could only hope to reach a maximum speed of 34km/h at best. The Sd.Kfz.186 Jagdtiger entered service in late 1944, and it served on both the Eastern and Western Fronts, with around 80 or so being produced. The first 11 Jagdtigers manufactured were based on a Porsche suspension system (using a paired external torsion bar suspension system with eight single road wheels), while subsequent vehicles employed a Henschel suspension design (individual internal torsion bars with nine double road wheels). Dragon previously released a 1/35 scale Premium Edition Jagdtiger Porsche kit (Item No. 6351), but this latest vehicle has received a stunning makeover. The main improvement of this new kit is the application of zimmerit on the upper hull, rear plate, glacis and fenders. Naturally, these parts coated in zimmerit are brand new components, and Dragon’s designers are calling it one of the best renditions ever! The pattern is made to a master’s standard, and it’s delivered via Dragon’s highest levels of technology. Befitting the Jagdtiger’s bulk, this is also Dragon’s largest coating of zimmerit ever, keeping it streets ahead of other manufacturers. The hull is made from one piece thanks to advanced slide molds, and this provides a suitable platform upon which to build the rest of the model. Other brand new parts include the mantlet and glacis plate. This is an impressive kit, and its new textured surface makes it even more desirable!