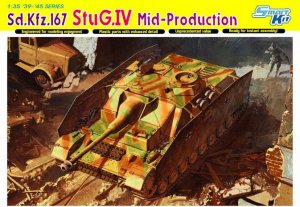 Sd.Kfz.167 StuG.IV Mid-Production The Sturmgeschutz IV was an assault gun produced in similar fashion to the more numerically common StuG.III. However, as its name suggests, it was based on the hull of the Panzer IV tank rather than the Panzer III. This came about because Alkett (a manufacturer of the StuG.III) was bombed in November 1943. Therefore, in an effort to increase assault gun production numbers, Krupp installed slightly modified StuG.III superstructures on the chassis of the Panzer IV. Krupp built 1,108 StuG.IV vehicles between December 1943 and May 1945. While this number was far less than the StuG.III, Krupp did help ensure continuity of assault gun production. Crewed by four men, the StuG.IV armed with a capable 7.5cm StuK40 L/48 gun proved an effective tank hunter.