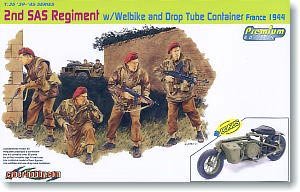 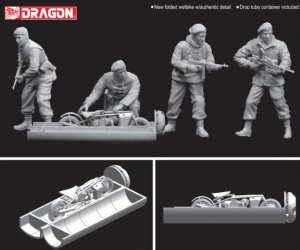 2nd SAS Reglment w/Welbike and Drop Tube Container France 1944 The Special Air Service, more commonly known as the SAS, is one of the most famous and elite military units in the world. The SAS was famously involved in resolving the Iranian Embassy siege in London in 1980, and has been deployed in numerous hotspots around the world since then. The SAS was actually born in 1941 in the midst of WWII for the purpose of operating deep behind enemy lines in North Africa. The SAS subsequently also participated in the invasions of Italy and France, operating deep inside enemy territory conducting raids, ambushes and supporting local resistance members. In all, around 2,500 personnel served with the SAS and associated Special Boat Service (SBS) during WWII. Dragon’s new figure set features four soldiers from the 2nd Regiment of the elite SAS operating in France.