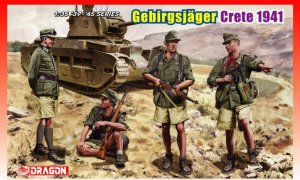 Gebirgsjägers Crete 1941 Operation Mercury, the Battle of Crete, was joined on 20 May 1941 when German airborne troops parachuted onto the Mediterranean island. The bloody battle lasted eleven days, but at last it resulted in the German capture of the Allied-controlled island. Crete had offered valuable harbors for the Royal Navy and airfields for RAF bombers, so its loss was keenly felt. What is perhaps not so well known is that German Gebirgsjager (mountain troops) played a significant part in the operation alongside their airborne brethren. The 5th Gebirgs-Division had a force of 15,000 men in three infantry regiments (85th, 100th and 141st) and an artillery regiment (95th), and it was inserted by air and sea as a follow-up force. This task was made easier by the capture of Maleme airfield on the second day of the battle. The Gebirgsjager were ideal for the task as they had light weapons, were easily moved by air, and could handle the mountainous terrain of Crete.