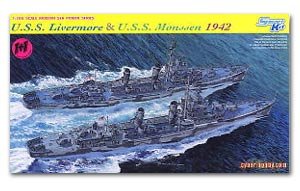 U.S.S. Livermore & U.S.S. Monssen 1942 The USS Livermore (DD-429) was a 1,630-ton Gleaves-class destroyer commissioned into U.S. Navy service in October 1940. The release of this set coincides with the 67th anniversary of the famous Naval Battle of Guadalcanal (November 12-15, 1942) in the Solomon Islands, where outnumbered forces of the U.S. Navy, including the USS Monssen, took on a Japanese task force. In the confrontation, the Monssen was hit by 37 shells and turned into a blazing wreck that eventually sank with the loss of 60% of the crew. Despite heavy losses for both sides, the Naval Battle of Guadalcanal turned into a strategic victory for the Allies.