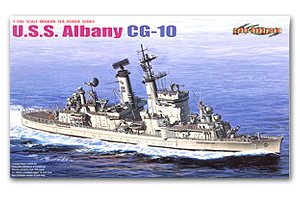 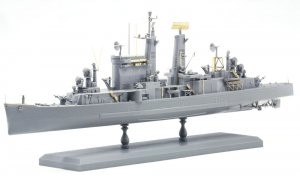 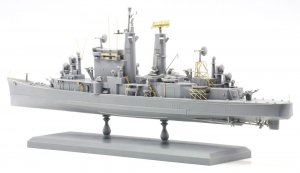 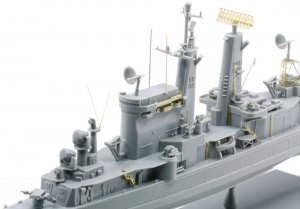 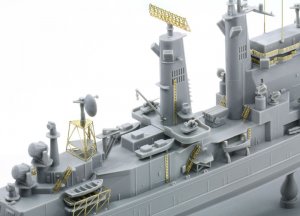 U.S.S. Albany CG-10 The new Cyber-Hobby kit is made precisely to 1/700 scale. The kit is a product of all-new toolings, with the exception of miscellaneous fittings such as missile launchers, radar and some other small parts. The hull comes with the option of full-hull or waterline versions, while the ship’s superstructure is finely reproduced. Many of the parts are products of slide molds to ensure maximum detail is rendered and to guarantee easy assembly. There are also some photo-etched parts to improve the overall level of detail allowed by plastic molding. This is a fine new kit of USS Albany in its existence as a guided missile cruiser. This particular ship was originally an Oregon-class heavy cruiser (CA-123) when it was commissioned into the US Navy in June 1946. Too late to join WWII, it served mostly in the Atlantic, Mediterranean and Caribbean. Then in June 1958 it began undergoing conversion into a guided missile cruiser as the lead ship of her class. At this point USS Albany was redesignated as CG-10, and it reentered service in 1962. Its missile armament included RIM-8 Talos and RIM-24 Tartar surface-to-air missiles, as well as ASROC missiles. From 1976-80, USS Albany was flagship of the 6th Fleet based in Gaeta, Italy.