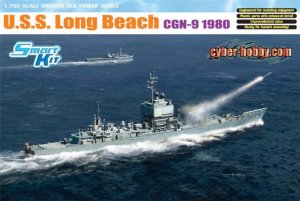 USS Long Beach CGN-9 1980 USS Long Beach (CGN 9) was a unique ship, principally because she was the only vessel in her class. She was a nuclear-powered guided missile cruiser commissioned into the US Navy (USN) on 9 September 1961. She also had the distinction of being the USA’s first all-new cruiser design since WWII, and since cruisers since then have generally been based simply on scaled-up destroyer hulls, her crew aptly described her as “The Only Real Cruiser.” USS Long Beach had a pair of 5-inch 38-calibre guns mounted amidships, and in 1979 she began a midlife upgrade at Puget Sound. At that point the original aft-mounted RIM-8 Talos launcher was replaced by twin four-cell Harpoon anti-ship missile launchers. The cruiser saw combat in the Gulf of Tonkin during the Vietnam War, and also endured long enough to provide support during the 1991 Gulf War as a carrier escort.