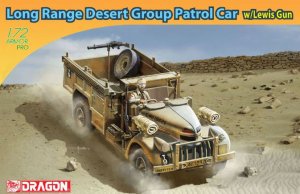 Long Range Desert Group (LRDG) Patrol Car w/Lewis Gun The Long Range Desert Group (LRDG) was a highly effective unit that roved far behind enemy lines in North Africa during WWII. It gathered intelligence, performed reconnaissance and conducted attacks from mid-1940 through to April 1943. Yet the elite unit never exceeded 350 men in strength at any one time. To successfully negotiate the desert sands, the LRDG used vehicles such as the Willys Jeep and other stripped-down trucks. Perhaps the vehicle most readily associated with the LRDG is the two-wheel-drive patrol car. It entered service in March 1942 and it became an LRDG mainstay. The sturdy Canadian-manufactured vehicles carried sand channels, jerry cans, a sun compass, sometimes a wireless, improved radiator cooling system and low-pressure desert tires. They were fitted with weapons such as Lewis guns, Vickers medium machine guns and the Vickers K.