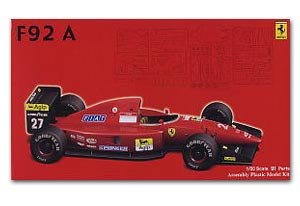 Ferrari F92A History The Ferrari F92A was a racing car that competed in the 1992 Formula One season. There were two versions of the car, the original version raced in the first eleven races of the season, with the updated F92AT version racing in the latter stages of the season.[2][3] The car was driven by Jean Alesi for the entire season, and by Ivan Capelli for most of the season, before he was sacked and replaced by Nicola Larini. The car was most famous for its "double-flat bottom" floor that made it difficult to drive. The car only achieved two podiums and a total of 21 points. The F92AT version was introduced at a test day in August held at the Autodromo Nazionale Monza circuit and first appeared in the championship at the Grand Prix of Belgium. The new version incorporated a seven-speed transverse gearbox, with a modified front suspension. It also included a more rigid engine mounting system and an up to date version of the underwing. The best results were two third places by Jean Alesi.

Qty.
Maquetas - Coches - Fujimi
Volver al listado
www.ecomodelismo.com use your own and third-party cookies to have the best browsing experience. If you keep browsing we understand that you accept our cookie policy.  Ver