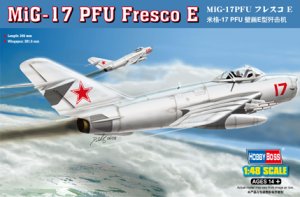 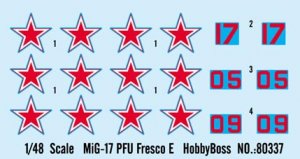 MIG-17 PFU Fresco E The Soviet MiG-17 fighter was designed to be more stable than its predecessor, The MiG-15 was unstable at high speed and too tight a turn could cause an uncontrolled snap roll and spin. To overcome this problem, the fuselage was lengthened, small 'fences' were installed on the upper surfaces of the wing to control airflow, and the wings swept back 45 degrees. The extra room in the fuselage enabled the internal layout and systems to be revised, and a more angular tail was added. These changes gave the aircraft great stability, essential for an effective weapons platform. The MiG-17 entered frontline service in February, 1953. The Fresco-A maintained the original VK-1 turbojet of the MiG-15. A VK -1F engine with afterburner was then fitted to the new Fresco-C, or MiG -17F . A fixed-scan radar was added to the MiG-17PF, or Fresco-D. The MiG-17PFU, Fresco-E, became the Soviet Union's first interceptor with its cannon deleted and four air-to-air missiles added.