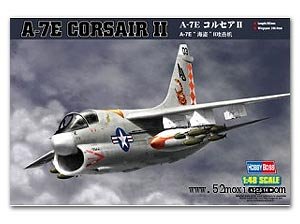 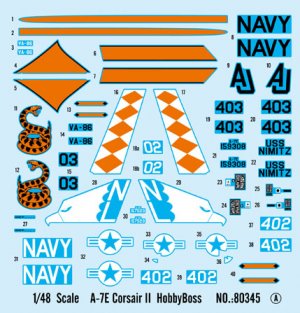 A-7E Corsair II The LTV A-7 Corsair II is a carrier-based subsonic light attack aircraft introduced to replace the United States Navy's A-4 Skyhawk, initially entering service during the Vietnam War. The Corsair was adopted by the United States Air Force, as well as the Air National Guard, to replace the A-1 Skyraider, F-100 Super Sabre and F-105 Thunderchief. The aircraft was also exported to Greece in the 1970s, and Portugal and Thailand in the late 1980s. The A-7 airframe design was based on the successful supersonic F-8 Crusader produced by Chance Vought. It was one of the first combat aircraft .to feature a head-up display . an inertial navigation system (INS). and a turbofan engine. A-7E, Naval carrier-capable equivalent of the A-7D; 529 built.