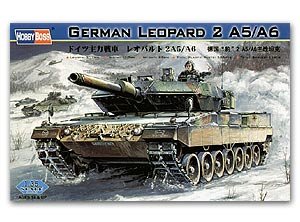 Germany Leopard II A5/A6 Scale model to scale 1/35 in plastic in order to mount and paint History The successor to the Leopard 1, the Leopard 2, was first produced in 1979. A variety of upgrade programs and options are available for the Leopard 2. These include the Atlas Elektronik Vehicle Integrated Command and Information System (IFIS), a digital command and information system. The Leopard 2 has had technical improvements under Upgrading Level I and Level II programs. A new smoothbore gun, the 120 millimetre L55 Gun, has been developed by Rheinmetall GmbH of Ratingen, Germany to replace the shorter 120 millimetre L44 smoothbore tankgun on the Leopard 2. It permits effective use of a new APFSDS-T round, DM53 (LKE II), with a longer rod penetrator, and which is under development.