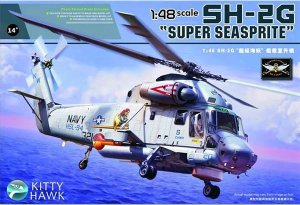 SH-2G super Seasprite The Kaman SH-2G Super Seasprite is an American ship-based helicopter with anti-submarine, anti-surface threat capability, including over-the-horizon targeting. This aircraft extends and increases shipboard sensor and weapon capabilities against several types of enemy threats, including submarines of all types, surface ships, and patrol craft that may be armed with anti-ship missiles. It was originally developed for the United States Navy in 1980s as a reengined version of the older Kaman SH-2 Seasprite.

Qty.
Maquetas - Helicopteros - Kitty Hawker
Volver al listado
www.ecomodelismo.com use your own and third-party cookies to have the best browsing experience. If you keep browsing we understand that you accept our cookie policy.  Ver