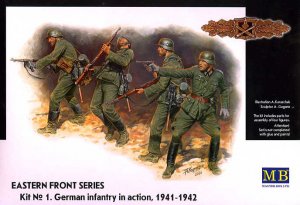 German Infantry in action , 1941-1942 During the first two weeks of severe frontier fighting, the German forces sent the main Soviet force reeling. Army Groups “North”, “Center” and “ South” could now advance towards their strategic objectives; Leningrad, Moscow and Kiev. Although on the defensive, the Russian forces managed to stage a number of counterattacks. These battles often turned into vicious hand to hand combat, as the soldiers closed on each other. This kit includes the figures of 4 German infantrymen fighting off attacking Russian forces.

Qty.
Figuras - Militares - Master Box
Volver al listado
www.ecomodelismo.com use your own and third-party cookies to have the best browsing experience. If you keep browsing we understand that you accept our cookie policy.  Ver