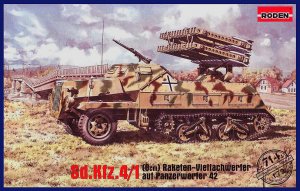 Sd.Kfz.4/1 Panzerwerfer 42The SdKfz 4 "-Gleissketten Lastkraftwagen" or Maultier was the name of a type halftracks developed during World War II by Germany, which, between 1933 and 1945, was the leader in the construction of these vehicles . The SdKfz 4 was developed after the invasion of Russia in 1941 because he had proved that classic commercial vehicles (primarily type 3t Opel-Blitz 3,6-36S, the 3t Ford V8 Type G 398 TS / V S 3000, the Magirus Type S 3000 Mercedes-Benz and 4.5 t Type L 4500 R) which usually ensured the supply of German troops became bogged down in mud and ice present in Russia. A total of 22 500 half-track SdKfz 4 was produced until 1944. Subsequently, the Opel trucks were filled with rocket launchers and 150 mm Panzerwerfer called SdKfz 4/1, about 300 copies were produced. However, these models did not exceed a speed of 40 km / h because of their extra weight. Each Halftrack was equipped with a radio FuG Spr G.

Qty.
Maquetas - AFV - Roden
Volver al listado
www.ecomodelismo.com use your own and third-party cookies to have the best browsing experience. If you keep browsing we understand that you accept our cookie policy.  Ver