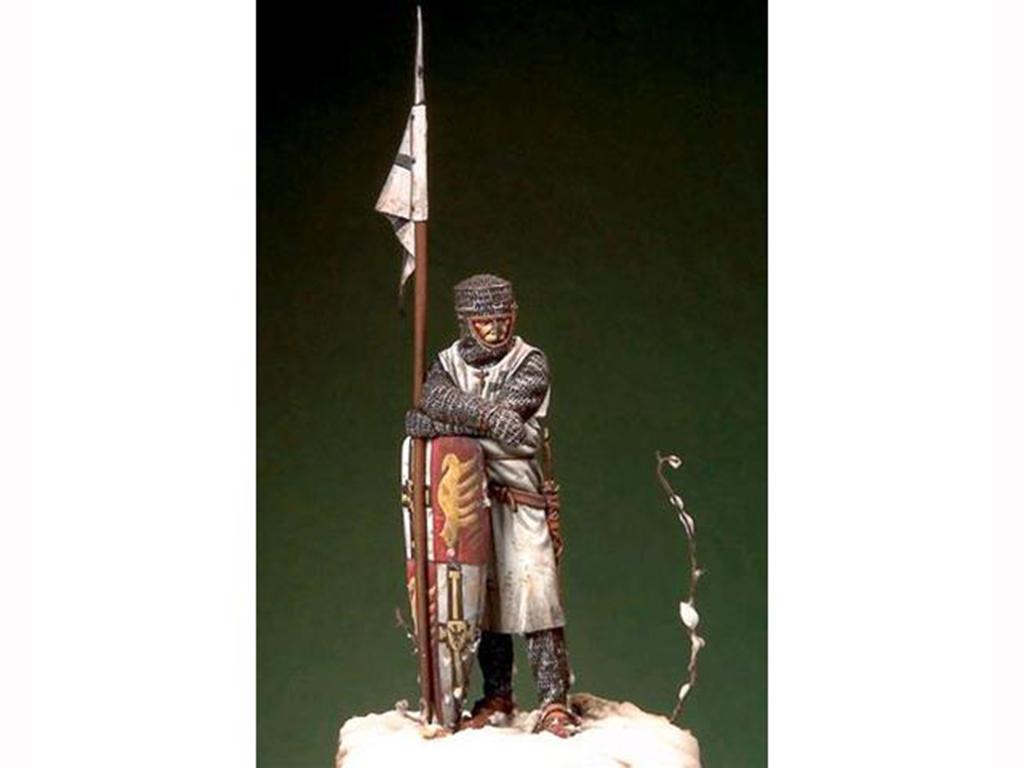 Knight of the Teutonic Order - Middle of XIII Century The Teutonic Order can trace its roots and origins to a fraternitas from Northern Europe around 1130. Around the years 1189‑91, this fraternitas of Germanic Knights, affiliated to the St. John Hospitalers Order participated m the armed Crusades of the Holy Land. In 1198, a Papal seal approved the formation of the Teutonic Order, similar in structure to the Hospitalers and Templar Knights, but composed exclusively of knights from Germanic origins. They chose the white mantel (of the Templars) but added a black cross. The Teutonic Order used a variety of names until 1220, when they assumed the name "Orden den Ritter des Hospitals St. Marien des Deutsches Hauses zu Jarusalem". After the fall of the City of Saint John of Acre in 1291, the Teutonic Order eventually stabilised and moved their seat of power to the Castle of Marienburg, Prussia, modern day Malbork in Poland. Between the XIII and XVI centuries, the Order of the Teutonic Knights managed to form a State of the Order (Ordenstaat) on the beaches of the Baltic Sea, which covered vast, marshy, heavily wooded and lake territories spanning Germany, Poland, Lithuania, Estonia, Latvia and Russia. On these eastern frontiers the Teutonic Knights started the conquest of the Baltic and Slavic land and the conversion (with the force of the sword) into Christendom of the native population. It was not long after that the Teutonic Order assumed the characteristic of a true and proper State of these Germanic speaking people (Ordenstaat), forming the base for Germanic expansion towards the east, Drang nach Osten a fatal plan that lasted and was re‑visited in future centuries. The same glorious insignia of this Order, the black cross on a silver background, was used by Frederic The Great during the XVIII Century, a symbol of the military order of Eisenkreuz, the famous 'Iron Cross", which still decorates the bravest German soldiers today.