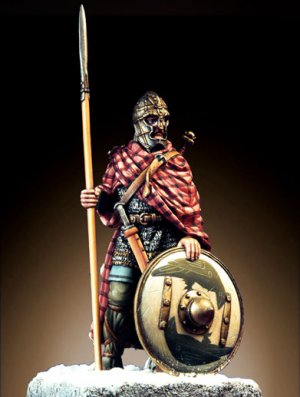 Anglo Saxon Warrior with lance - VII Century A.D. The Angles, Saxons and Jutes arrived on the britsh shores at the beginning of the V Century A.D. They arrived firstly as mercenaries and the other waves of migration followed primarily from Northern Europe. During the VII Century, they founded various kingdoms in Britain and also conquered the territories of Mercia and Northumbria. They also fought the Picts at the Battle of Dunnichen in 685. The Anglo-Saxon warriors fought on foot armed with a lance, sword, shield and sax (a short cutting dagger). They had body armour known as byrne, which was chainmail of Danish or Germanic origin, often embellished with rows of gilded rings. Several Anglo-Saxon sagas recount helmets painted in very bright colours. The lance was the most important weapon of the Anglo-Saxon warrior. The lance was often given a special name, wich was a pre-heraldry symbol of the warrior and his rank.