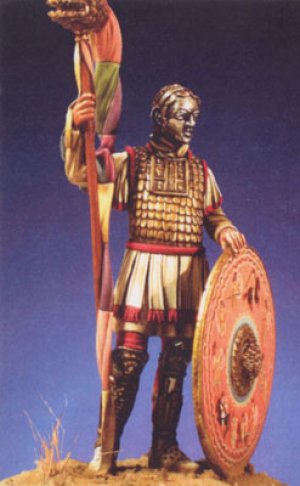 Roman Cavalryman, Draconarius in Hippica Gymnasia dress 2th A.D. The uniform dress characterized by a rich panoply where stands out the helmet wich have a mask wich covers completely the face. The origins of these helmets, called auxiliary cavalry sports helmets, in accordance with the classification of Russel Robinson, are obscure and go back to habits of peoples of the pre‑roman civility. A Etrusch helmet "with face" of 4/3 century B.C. kept in Vatican Museums. On many helmets of type “sports” are rappresented the feminine feature, perhaps to evoke the amazons, the mythical warrior women. In accordance with recent studies the uniform dress Hippica Gymnasia was utilized in civil and religious ceremony. G.Webster tells that these ceremony which were characterized by equestrian games, go back to archaic period of roman civility and link up to Ludus Troiae wich celebrated every year, the first day of march (month wich was dedicated to Marte, god of war). It’s not sure that rich uniform dress was utilized also in war. This thesis is supported from ancient and medieval authours, and it is proved because a sport helmet was discovered in Germany in Teutoburg forest, where was destroyed the Varo's legions in the 9th A.D. The parades were described in the Ars Tattica by Arrian and they consisted in evolutions where cavalrymans tried to hit the enemy's shield with a lance without point. Our Draconarius (the name derived by flag's form wich was like a dragon's head) wears a formed like scales lorica (lorica squamata) formed like iron or bronze scales; stuffing (subarmalis) leather with fringes (pteruges) leather or withe; scarf (focalae) red; tunic and trousers (bracae or femoralia) red or yellow; boots, (calicei) red; socks: natural woven; helmet and greaves, (ocreae) with iron with bronze embossed work; shield (inside) red with handle natural wood, (outside) red with mythological drawings; insigna (flag) Draco: head bronze: hasta, natural wood; woven: red. 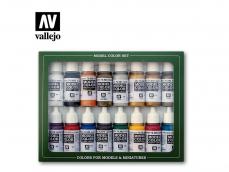