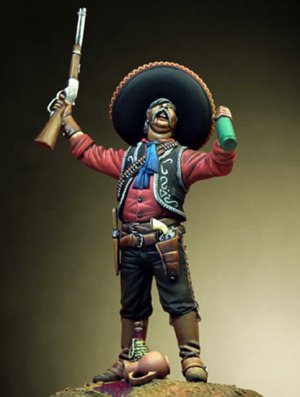 Mexican Revolutionay, 1910-17 In 1910 the dictatorial government of Porfirio Diaz caused the Mexican people to rebel. Diaz was replaced by the liberal Francisco Madero, who was assassinated in 1913. His place was then occupied by Victoriano Huerta, a right-wing general. During this period Emiliano Zapata, one of the most important leaders of the revolution, demanded that lands be returned to their rightful owners, the campesinos. Huerta made an enemy of two other important leaders of the revolution: Pancho Villa and Venusiano Carranza, and in 1914 was forced to resign from presidency. Zapata was killed, Pancho Villa went into hiding, and on the orders of Carranza who had, in the meantime, taken the place of Huerta, became a wanted man. This was the conclusion of a period of fratricidal fighting and bloody battles among the revolutionaries themselves. In 1917 Carranza gave Mexico a new constitution that separated the Church from the State. The State became the owner of all the mining resources and the lands were returned to the indios as desired by Zapata. The revolution had involved the entire Mexican territory, and men of all social levels found themselves fighting alongside women and children. The figure represents a revolutionary in the armies of either Zapata, Villa or Carranza.