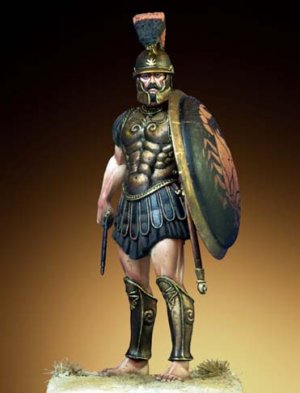 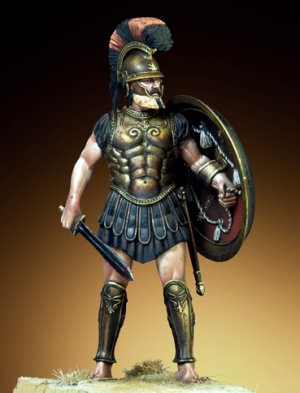 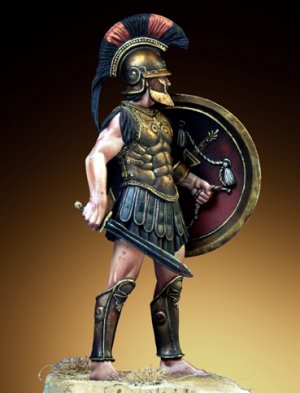 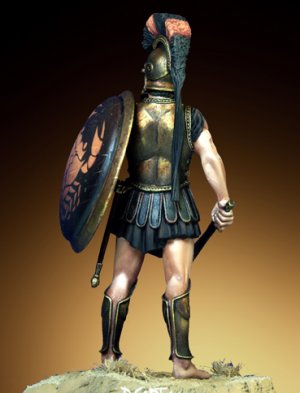 Greek "Siceliota" Hoplite - V Century B.C. with a Thracian helme The history of Sicilian Greeks, that sources call "Sokeliotes", began around the second half of the VIII century B.C., with the foundation of the first colonies (6, as we are told by the historian Thucydes: Naxos, Siracusa, Zankle, Leontinoi, Katane and Megara Iblea). From the foundation of Naxos in 735 B.C. to the roman conquest of Sicily in 212 B.C., following the siege of Syracuse, the Sicilian Poleis were among the most illustrious centres of Greek culture in Mediterranean, protagonistes in victorious wars against Carthaginians or Greek from the motherland (the defeat of the Athenians at the hands of the Syracusans in 413 B.C.), inventors of wide-ranging strategies such as when, anticipating Rome, the tyrant Agathocles of Syracuse, in 310 B.C. landed in Africa with a fourteen thousand strong army to wage war on Carthage. In 688 B.C. colonisers from Rodes and Cretes founded Gelas, wich, in its turn, in 580 B.C. founded Akragas -modern day Agrigento- defined by Pindar as "the most beautiful city of mortals". The model has been taken from a painting in red figures on a large Attic crater, attributed to the painters of the Niobidi (470-460 B.C.), and represents Amazons in battle, with, at its centre, a fight between Achilles and Penthesilea, Queen of Amazons. The vase is keept at the Regional Archaeological Museum in Agrigento, Sicily. Achille is wearing a Thracian helmet with a crest, a "muscular" bivalvular cuirass, jambs and is carrying a bronze shiend (oplon). An interesting feature is the presence of pteruges (inguinal fringes in leather or pressed linen) that hint at an intermediate protection between the cuirass and the tunic.

Qty.
Figuras - Roma - Romeo Models
Volver al listado
www.ecomodelismo.com use your own and third-party cookies to have the best browsing experience. If you keep browsing we understand that you accept our cookie policy.  Ver