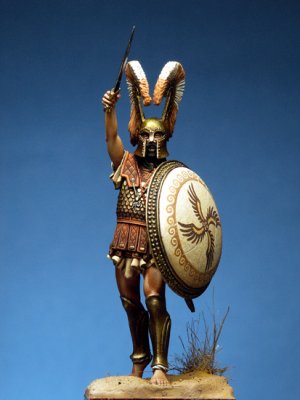 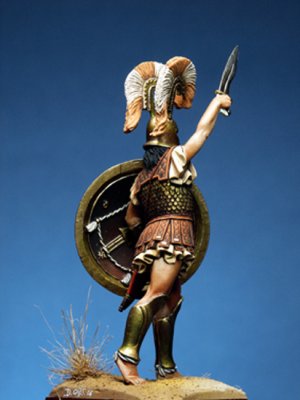 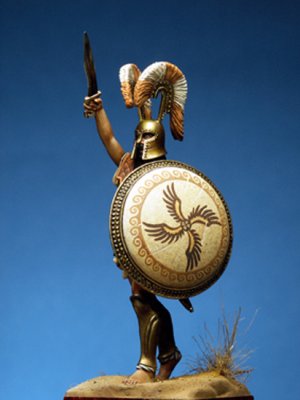 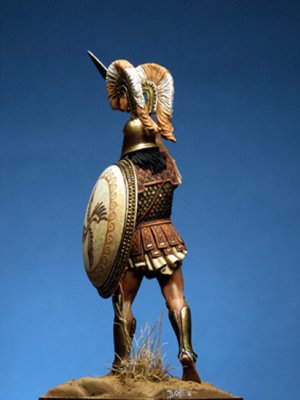 Lokros Hoplite Thermopylae (480 b. C.) was the most uneven battle of military history through the centuries. No more than 7000 Greek Warriors, from Sparta, Lokrida, Korinthos, and other Regions fought under the command of Leonidas, against hundreds of thousands of Persian enemies (3 million according to the poet Simonidis from Kios). Thermopylae is a landmark of heroism and bravery, in the Ancient Greek spirit, and an ideal example for the generations that followed. The figure is a warrior from Lokrida, who fought alongside the Spartans. He is wearing an ancient Korinthian type helmet with impressive double crest holder. Ancient pottery decorations show helmets with even 3 crests in order to make the warrior seem taller and more aggressive, on the battlefield. He also wears a flexible complex cuirass, covered with overlapping metal pieces (folids) for extra protection and bronze knee protectors, with protective cloth bandaging at the lower end. He is carrying a large “Hoplon” type shield. His weapon is a typical for the period: a “kopida” style curved sword. The decorative motives on the shield’s outer surface are a continuous spiral (symbol of fire) the right oriented swastika (symbol of the unconquered), and the four radial spoke wheel (symbol of the chariot of the God of War).