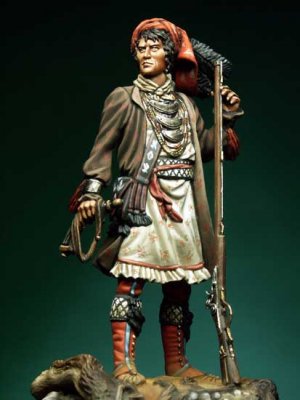 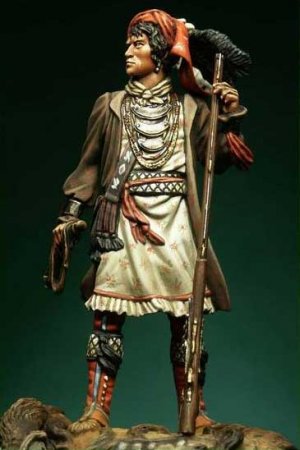 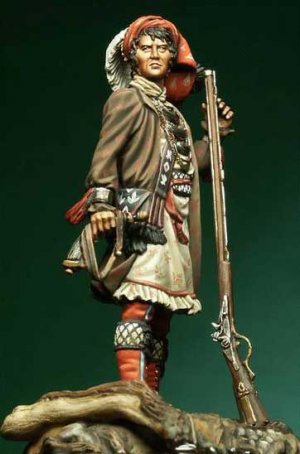 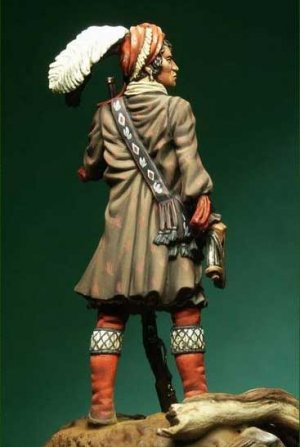 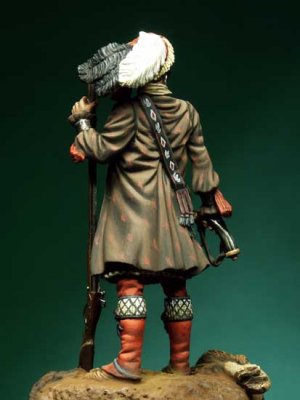 ''Osceola'' Seminoles Chief The name of Seminole comes from the Creek words Sim-a-no'-le, or Isti simanóle, that mean 'separatist', 'runaway', because the tribe was formed at the beginning by Oconee, then chiefly of Muscogee (Creek) and Hitchiti, besides Alabama, Yamasee, Yuchi and Negro slaves escaped from South Carolina and Georgia. They planted their settlements about Apalachicola River, in the old Apalachee country and in the Alachua country in the central part of the State, although a few were situated near Tampa Bay and even well down the eastern coast as far as Miami. While Spanish went to war with United States in 1812, the Seminole became involved in the hostilities, and in 1817-18 began first Seminole war, when Gen. Andrew Jackson invaded Florida with 3.000 men, forcing Spain to give the territory to the United States in 1819. The Seminole ceded most of their lands by treaty of Ft. Moultrie in 1823, but on 1832 the new treaty of Paynes Land obliged them to remove beyond the Mississippi within 3 years. This treaty was repudiated by the largest part of the tribe, under the leadership of the celebrated Osceola, who began in 1835 the second Seminole war, ended in August 1842. A third war opposed Seminole to US Soldiers from 1855 to 1858, under the leadership of Billy Bowlegs, but at last the resistance finished, with the practical expatriation of the tribe from Florida for the Oklahoma. The wars cost the expenditure of $20.000.000, and nearly 1.500 American soldiers, the worst episode was the massacre of Major Dade with almost his detachment of 108 men, killed during the second War. Osceola, whose original name was Asi-Yaholo (asi was a black drink containing caffeine et Yahoolo was the long cry sung by the servant of the drink) was born about 1803 near the Tallapoosa river, from a Creek woman named Polly Copinger, married with a white man called William Powell, while the legend tells that his grandfather was a Scottish; this could explain his face features and the complexion, being tall about six feet tall, although he said that William Powell was only his stepfather and his blood was pure. He joined the Seminole near the Apalachicola river in 1814. As a young warrior he fought in the first Seminole War of 1817-1818, some reports assert that he was captured in 1818 along the Enconfino River by General Andrew Jackson, but soon released because of his age. After the Treaties of Moultrie Creek of 1823 and Treaty of Payne's Landing of 1832 Seminole were obliged to leave Florida, in 1833 seven chiefs endorsed the new Treaty of Fort Gibson, accepting to reach Oklahoma. However, many Seminole refused and Osceola becoming their leader, killed the Indian Agent Wiley Thompson, who had forced the removal, ambushed Charley Emathla, one of the chiefs submitted and paid by whites. After the Dade’s massacre, Osceola secreted the women, children, and old men of his tribe, Osceola began to harass the Government forces, leading a bloody guerrilla for two years all over the countryside and mocking the various US commanders charged to find him, as General Duncan Lamont Clinch or Gen. Gaines. In fall 1837 Gen. Jesup seized Osceola while attending a conference under the flag of truce, an action condemned by public opinion. Imprisoned at Fort Moultrie, Osceola passed some months of sufferance, probably malaria or poisoning or the loss of freedom caused his death on January, 30 of 1838.