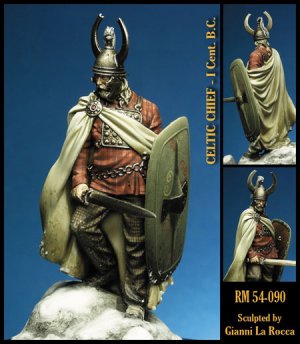 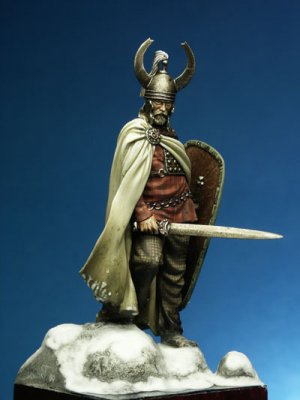 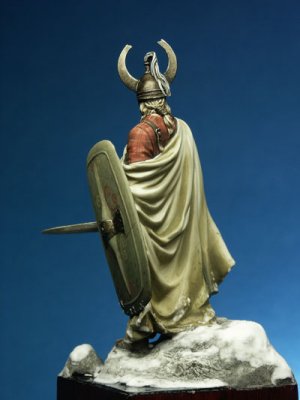 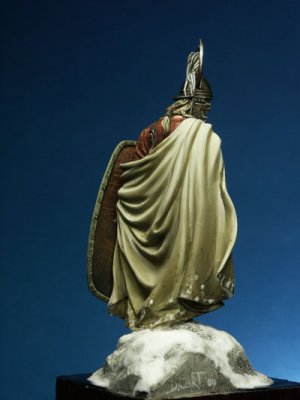 Celtic Chief - I Century B.C. The armor consisted of Celtic shields with wooden finish in bronze and iron decorated in various ways. On some of these animals were sculpted in bronze, with both decorative and defensive. The head wore helmets of bronze with great figures such as protruding horns, fronts of birds or quadrupeds, which did appear that those giant wore them. Their trumpets of war produced a deafening sound and terrifying to the enemy. Some wore on the breast plates of iron, while others fought naked. Not only used short swords like the Romans glad, but also long, anchored to chains of iron or bronze, which hung along their right flank, as well as tips for spears by the iron length of a cubit and a little less than two palms of width, and their tips were darts longer than swords of other peoples. It tells them also that they preferred to resolve the battles with duels between the leaders or the most skilled warriors of each of the opposing sides, rather than clash in battle. They also had the habit of hanging the heads of enemies killed in the neck of his horse, and, in some cases, to embalm, when the won was a warrior opponent, it considered the head, and not the heart, the seat of 'soul. The vocation of this warlike people, together with the prospect of a penny spoils occasional or regular, resulted finally in a practiced by many of his tribe: to become mercenary soldiers. The first indication of such a choice risale al480 BC, when it seems that some soldiers have taken part Celtic, a side of the Carthaginians, the battle of Imera. Other Celtic mercenaries are mentioned during the shipment of Syracuse in Greece 369-368 BC, in 307 BC, when three thousand armed roosters joined to Agatocle of Syracuse, along with Samnites and Etruscans, to conduct a campaign in North Africa, the struggles that followed between the heirs of Alexander the Great (the Diadochi). This practice not only generated an expanding market for several tens of thousands of brave soldiers, experts and least expensive of the Greeks, but also allowed, the return of soldiers from wars some 'anywhere in the Mediterranean, to introduce all the coinage' Internal communities Celtic. From their contemporary Greeks and Romans described the Celts were tall, muscular and robust, and the eyes were generally blue, the light skin and blond hair.