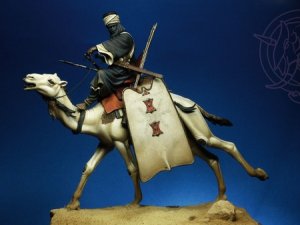 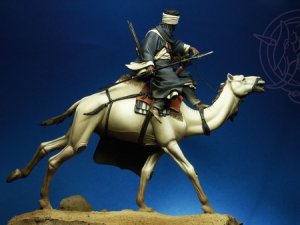 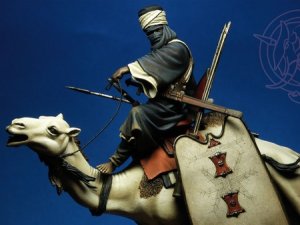 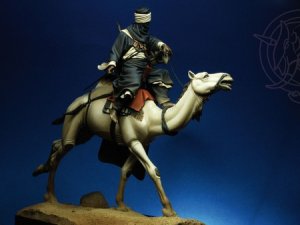 Touareg Warrior Second Half XIX Century The Tuaregs are a tribe of the Berber branch, which is the general name of the Hamitic populations of North Africa which extends its boundaries from Eastern Egypt to the Atlantic Ocean and from the Mediterranean Sea to the Southern areas of Sahara. The Tuaregs inhabit the central part of the Sahara and are divided into Northern Tuaregs, living in the Hoggar massif and Southern Tuaregs living in the Tassili mountains. Their name derives from the Berber term Targa which is the translation of Fezzan a region once under their domination. The Tuaregs are warriors and plunderers. Those that own land, have servants to cultivate it, and the most important products are grain, vegetables and tobacco. The major wealth of this population is represented by the breeding of sheep and camels. Their social organization is typically feudal and is distinguished by a noble class, vassals, servants and workmen; all governed by a King, amenakal, the Master who is elected by the nobles. The Tuaregs are semi-nomads, and once they were the major peril for the Arab caravans that crossed the Sahara, on their way to the markets of North Africa and the Southern territories of Sudan. Sand storms and hot sun oblige the Tuaregs to cover themselves totally. They wear head-gear that wraps around their head leaving only a fissure for their eyes. Since this headgear is blue they are also called the blue men. Under the wide-sleeved tunic, usually deep bleu, they wear e sleeveless shirt. To make riding camels easier, they wear very wide trousers that become tight below the knees. To protect their back and maintain it in an erect position during the ondulatory movements of the camel, they wear a very wide rigid belt. Foot-wear is generally pointed up to walk on sand.