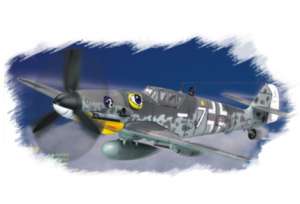 From HobbyBoss to scale 1/72 for mounting and painting.

The Bf109G-6 was jury-rigged into a number of roles for which it was unsuited and its perfromance suffered further.

When combined withless capable pilots, this resulted in devast-ation to the Bf109G-6 units. who were hunted by packs of P-51 Mustangs and P-47 Thunderbolts during 1944.

The most widely produced versions of the G-6 were the R-3 fighter. the R-6 fighter.